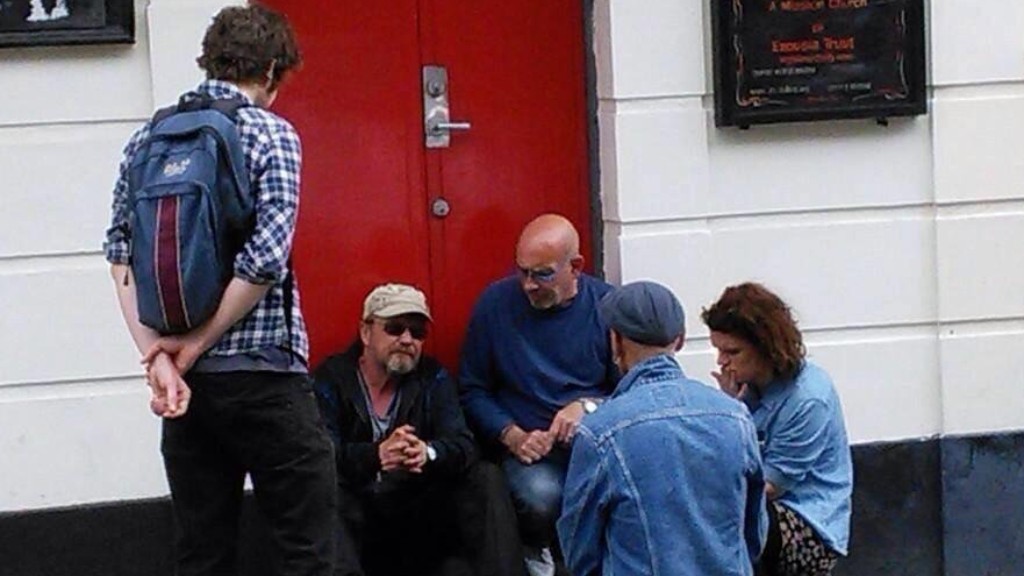 This month we have launched our ‘One More Mile for Zac’s Place’ Just Giving Campaign to help raise additional support at a time when we are looking to make significant upgrades on the building and increase the level of activity and support we provide. The Just Giving platform enables individuals to easily arrange sponsored events for our cause and administer the donations, including reclaiming gift aid. To kick the campaign off, Zac’s Place minister, Sean, will be running the Swansea Bay 10k on 19 Sept. 2021.

To find out more about the campaign and to support it visit https://www.justgiving.com/campaign/zacsplace

We love the picture above. It captures a moment several years ago in between rehearsals of a play written and produced by the Gritty Productions team, (who were behind the Swansea Living on the Streets series). This play brought together actors and artists alongside those sleeping rough to write and perform together. It was a remarkable experience and brought some insight how bringing creative expression and a commitment to tell a story well can have such a positive impact on people’s lives.
We’d love to do more of that kind of stuff from our venue into the future. Feel free to help us go one more mile as we help others to do the same if you can.
To find out more about the campaign and to support it visit https://www.justgiving.com/campaign/zacsplace

Swansea based recording artist and songwriter Steve Balsamo has a released a beautiful new song this Christmas, and has chosen to support Zac’s Place in the process. Steve, a long time friend and advocate of Zac’s Place, has included a donation link on all his social media platforms for the lyric video of the song ‘Tenderheart’. Thank you Steve and your ever loyal supportive followers. Check out the song below and expand the text to read the full story.

Huge thanks to everyone at BBC Radio Wales who will be playing a new song of mine, Tenderheart, over the…

Join Steve Balsamo & Rosalie Deighton and friends, on Fri 2 Dec,2016 for what will be a great night of live music that benefits Zac’s Place.

As well as Balsamo Deighton, Who’s Molly perform and the house band is expected to feature some of the areas finest musicians including Andy Collins, Tony Kiley, Tim Hamill and Mal Pope.

Support us and support live music – get in early for your tickets!

A Unique Evening With Martyn Joseph and Bob Harris OBE in support of Zac’s Place.

Martyn Joseph is pleased to announce what promises to be a very memorable and unique evening with his special guest Bob Harris OBE, in aid of Zac’s Place in Swansea.

Martyn’s Let Yourself Trust has been promoting and raising funds for Zac’s Place over the last 6 months on both sides of the Atlantic. Zac’s Place supports homeless people in crisis and provides them with new opportunities. For some it is the only safe haven in their lives, offering love, support and acceptance. The charity is the third project Let Yourself has been working with after a Children’s Theatre in Palestine and an orphanage in Guatemala, and this evening will be a beautiful culmination of their partnership and fund raising during this time as well as shining a light on the amazing work done at Zac’s Place.

The show will feature MJ doing what he does best, bringing his “stunning heartfelt music” to an intimate audience at Zac’s Place, along with Q and A time with both Martyn and Bob and also Sean Stillman, Zac’s founder, will talk about the inspiring work they do.

Martyn Joseph is a powerful singer and songwriter gifted with the rare ability to speak to the soul with his expressive and poignant lyrics. With a career spanning 30 years, 32 albums, over a half a million record sales and thousands of live performances, the versatility of his music touches genres of folk, rock, soul, folk-funk and Americana, yet somehow all these labels cannot define the spirit of his music

Bob Harris is a legend, pure and simple.
Described by ‘Radio Times’ as ‘one of the greats of British contemporary music broadcasting and an independent champion of great music’ and by the ‘Mail On Sunday’ as ‘a national treasure’, Bob has been at the centre of the British music industry for nearly forty years.

Don’t miss this opportunity to share in what will be an unforgettable up close and personal event.

Stories From The Road